NOTE: This Website IS BEST VIEWED on your monitor in FULL SCREEN WIDTH format !!

NOTE: BE PATIENT !!! --- this is a VERY LONG website of many pages of photos - so computer viewers with older BROWSERS, give it a small bit of time for fully "Loading Up" all its pages on to your system. Thanks!!
(It WILL be WORTH the trip...and enjoy!!)

I have ALSO installed the LINKS to my various NEWEST FLICKR PHOTO ALBUM "SETS" in the appropriate Subject-Category and applicable locations on the many pages of this Website for viewing all the additional hundreds of new better sharper large image digital photos of this O-Scale 2-RAIL NY City EL & Trolley Layout, showcased on those newest many FLICKR ALBUMS-SETS.


THIS ALL NEW WEBSITE WAS LAST UPDATED JULY 30, 2015 VIA ITS NEW WEBHOST-SERVER,

You can also VIEW VIDEOS of this NY City Model Transit System Layout on my YOU TUBE CHANNEL ACCOUNT, using the LINK BELOW:


Below are just a few random photos of the many more hundreds of existing sharp, high resolution, quality photos of this huge operating N.Y. City Model EL & Trolley Layout and its various types and classes of rolling stock. THE "NEW YORK CITY MODEL TRANSIT SYSTEM" - IN TWO-RAIL 1/4" O-Scale, was Designed and Built in fully Modular-Layout format, beginning back in January 1985.

JOSEPH FRANK
built this Layout so as to re-create the images and memories of the IRT & BMT Elevated Train Lines and the Trolley Car and Bus Surface Lines of earlier New York City, and to "capture" the look and feel of the multi - neighborhood N.Y. City scene panoramas that the "EL's" and their Rolling Stock passed through in the Era Period between 1940 through 1990's.

JAMES BOYLAN
is this layouts' over 3 decades long continuous partner since 1985, and he installed all the control systems, track blocks, lighting system circuits, and signal electrical circuits, and general wiring feeders and connectors, sockets, plugs, etc., for the entire layout system.


View from EL Station stairway down to a Brooklyn & Queens Transit (BMT) Peter Witt Trolley passing by in the shadows of the overhead Elevated Line Tracks and structure. 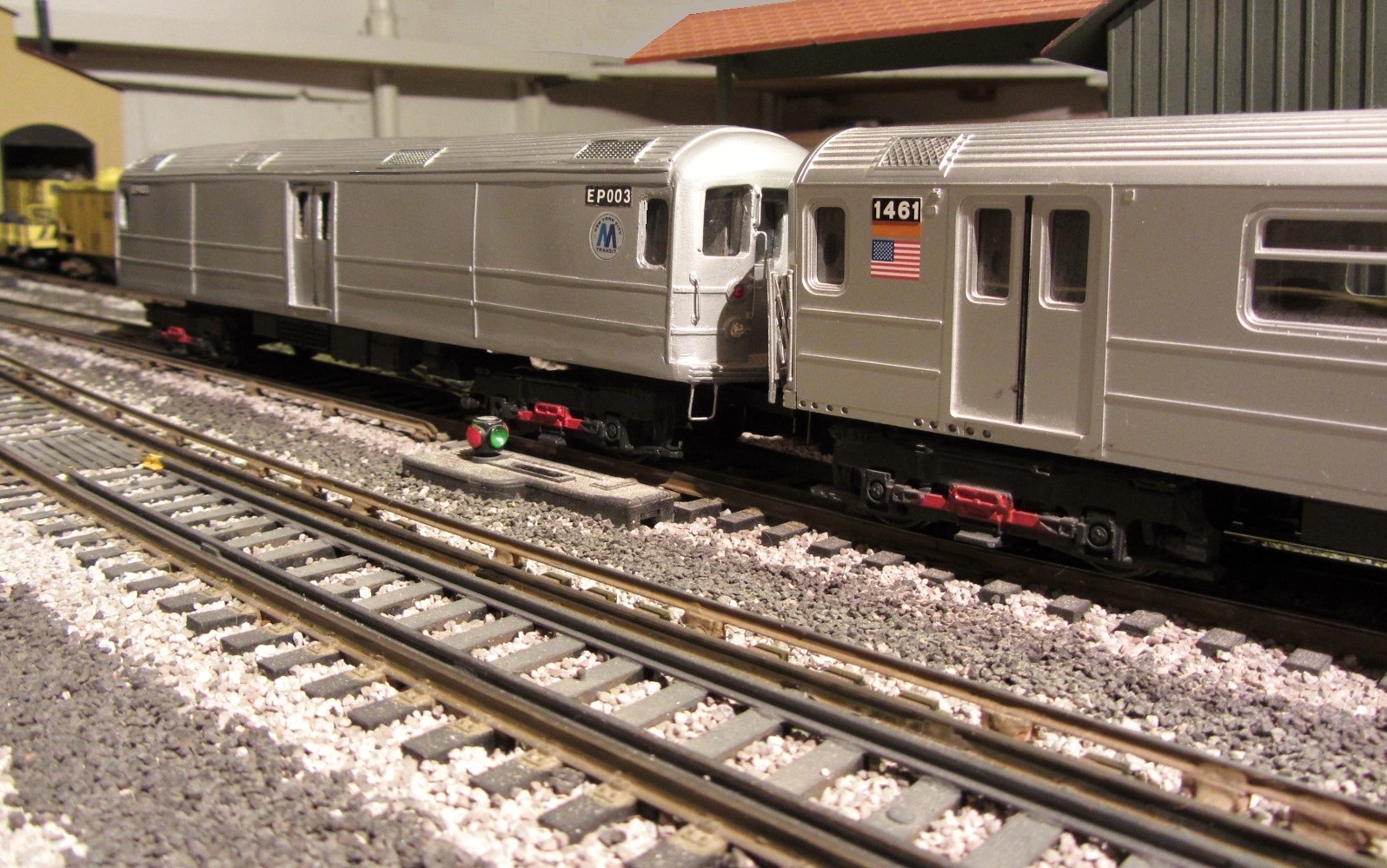 Sidewalk level view along the EL as a Brooklyn & Queens Transit (BMT) Peter Witt Trolley approaches under the EL structure while a Local train of Wooden BMT EL Gate Cars approaches riding above on the EL. Rooftop view to an express train of IRT R-Type subway cars in the 1980's GOH "Redbird" paint scheme running past an EL Local station on the center express track. (GOH = General Over Haul) View towards the EL and BMT EL Gate Motor Car # 1234 which heads a local train on the EL, as a Brooklyn Rapid Transit Co. Deck Roof trolley car operates below on the streetcar tracks. 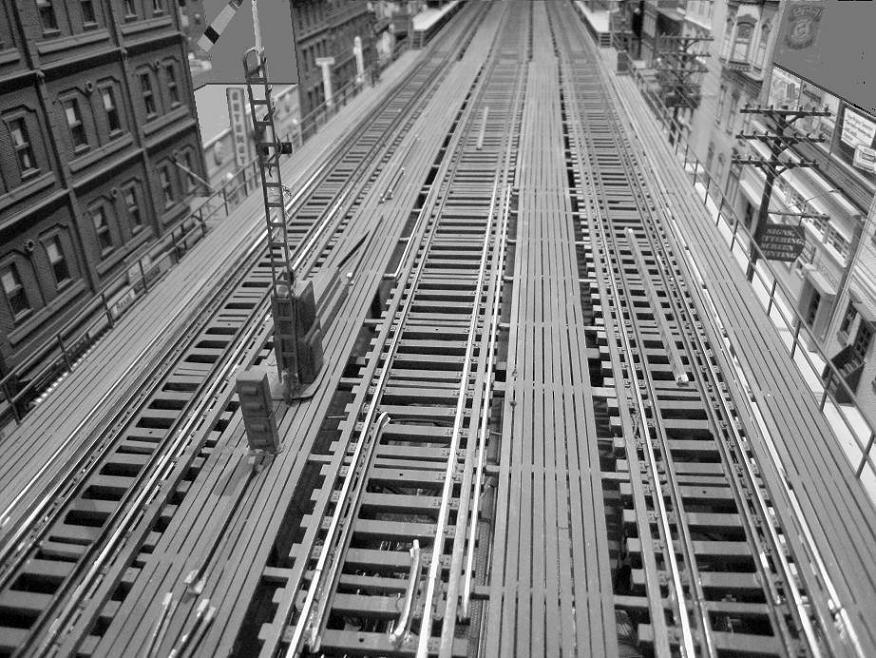 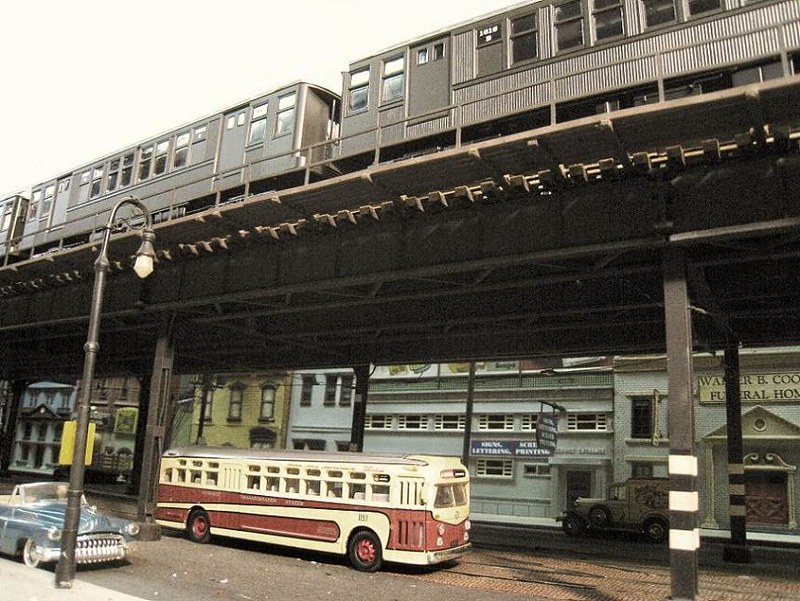 Street level view up to a Local train of ex-BMT Q Type 3rd Ave EL cars passing by as a transit Surface Transportation System bus travels the avenue below . 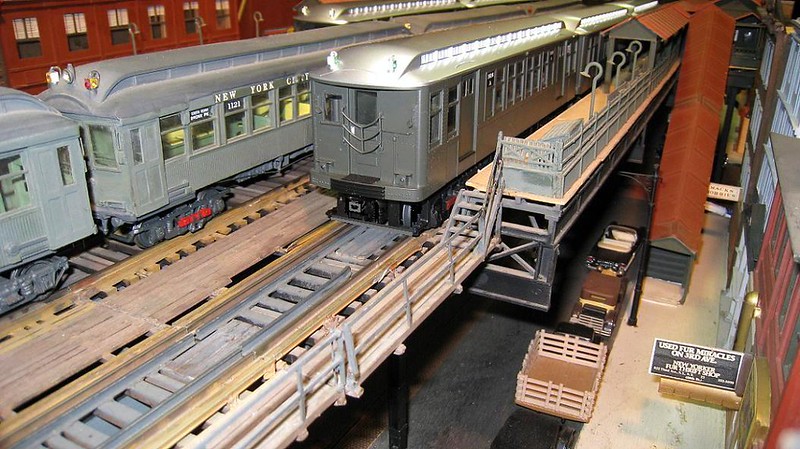 CHECK OUT the Excellent

"THE ONLY" One-Stop source for what goes on in our Rail Transit hobby, Model photos, Models & Related Products, Related Hobby SHOWS, LINKS, and MUCH MORE -

Created & Operated by Member STEVE OLSEN, who Co-Founded this Charter Member Association, along with a few guys & myself, back around 1981 -

YOU " MUST " CHECK THESE TWO SITES OUT and save them !!

Click-On the TWO LINKS just below ! View under the EL to a scratchbuilt replica of IRT Manhattan Railway Company EL Power Substation #7 and its steel "cable bridge" carrying heavy power feeder cables from the Substation to the EL Structure.

FOR MORE PHOTOS OF THIS MODEL "EL" SUBSTATION, SEE LINK IMMEDIATELY BELOW TO IT'S FLICKR PHOTO ALBUM SET